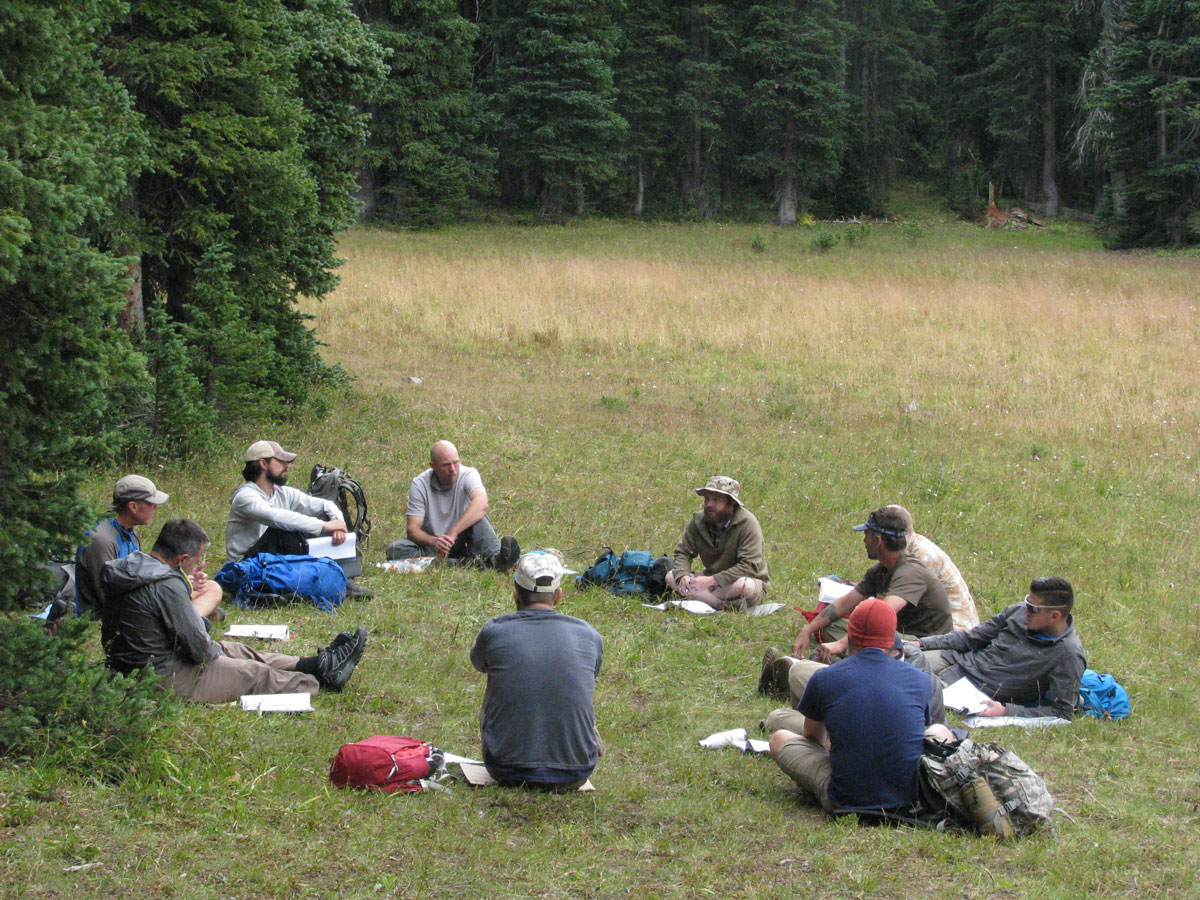 It’s All About Attitude

When I first pondered Tom Brown’s Field Guide to Wilderness Survival, I was sitting in a small discussion circle with fellow combat veterans atop Mt. Yeckel at 11,200 feet above sea level watching a storm huddle over distant peaks. 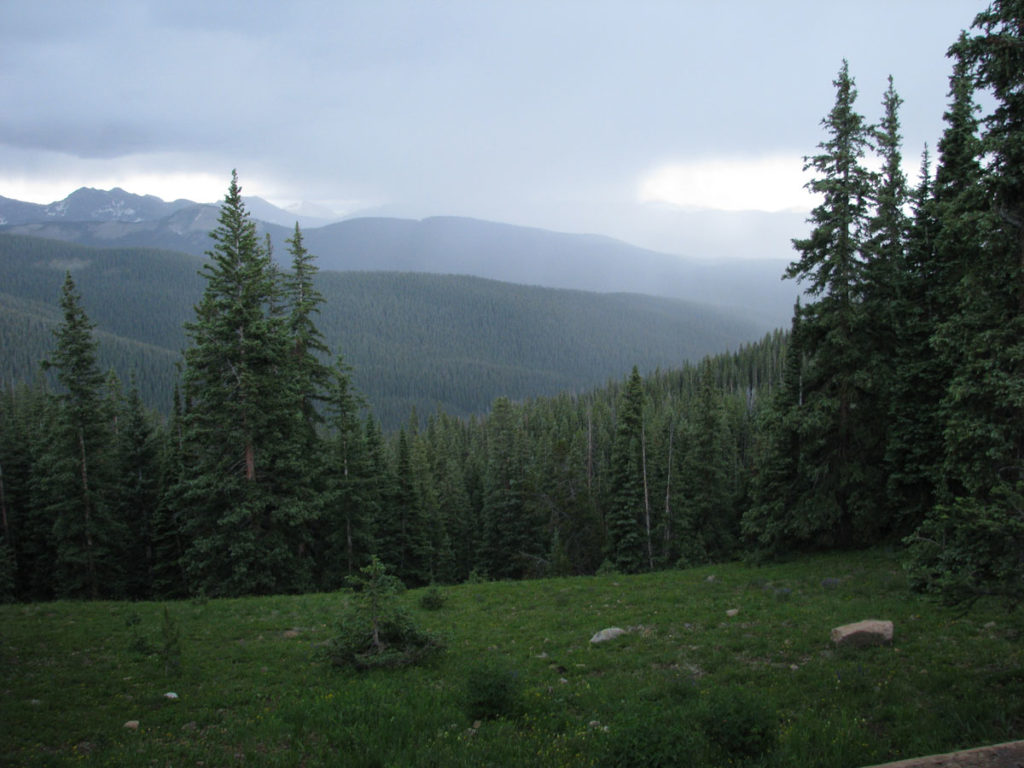 At first, I found it convenient to be discussing survival before we were sent off for our hour of alone time, which is referred to as a “solo.” I had never been alone in the woods before, so I made sure to pay extra attention during our discussion of Brown’s chapter on wilderness survival, especially as a storm loomed in the distance.

Huts For Vets leader, Paul Andersen, had a nonchalant demeanor during our discussion that did not indicate that the storm presented any danger. After all, we were sitting under a grand Colorado blue sky, letting the warmth from the sun dry the sweat from our backs.

As the words from the piece began to percolate through my mind, I began to examine my war experiences as well as my transition home through the lens of a wilderness survival situation. Given high rates of suicide, post-traumatic stress, divorce, DUI’s, etc. among the veteran community, transition for many veterans is truly a matter of life or death. I only realized later that the mindset I had about my war experience was very unhealthy and not conducive to a positive transition. Brown’s words began to resonate with me, and it was no wonder that I was struggling with the challenge of being out alone on a solo. I had a shitty attitude, and now the menacing storm silently drew closer.

It is truly said that the most important survival tool is the mind. But to keep the mind functioning smoothly, one must establish and maintain a positive attitude. Within hours or even minutes after the onset of survival stress, the attitude you take—and the decisions that result from it—may mean the difference between life and death. Over time, how you feel about yourself will determine how well you adapt to your new environment and its changing conditions. And no matter how long the survival situation may last, your outlook will affect the quality of your experience, just as it does in everyday life. The only difference is that the wilderness offers no escape from problems and much less margin for error

One guarantee in life is that we will all experience moments of distress. Brown objectively articulates the power of attitude in such a way that it could be applied beyond survival to everyday life scenarios—especially during a pandemic, like the one all of us are facing now. If we can understand the value of mindset then we can survive nearly any stressful situation. I should state that I am by no means a survival expert, nor have I read Brown’s book entirely. The important thing is that I found hope and insight in his words then, as I still do today.

Survival experiences can foster the idea that humans are too weak and frail to successfully confront the harsh conditions of wilderness living. As Brown astutely points out, we do not have the legs of the deer, the fur of the rabbit, or the claws of the cat. But we have the will and intelligence to adapt to almost any natural environment on earth. Most of us are much stronger and more capable than we realize. One of the first steps in a survival situation, then, is to recognize and acknowledge that strength. I am not talking as much about physical strength as a quality of spirit and character that is often hidden in modern society.

With the current pandemic, we all are experiencing some degree of “survival stress.” Lives have been lost, the unemployment rate is at an all-time high, and the very fabric of our societal structure is being re-woven. It is difficult to say with any certainty if our lives will ever return to how they were before the pandemic.

The optimist in me wants to say that we will return to normal, but none one knows for sure. Many of us are beginning to see and feel the ramifications that isolation is having on us and our loved ones. Yet our hope relies on our inner strength and our ingenuity, which fuel the “adapt-and-overcome” mentality that many of us veterans have gained through our military experiences.

When shit hits the fan and your main machine goes down, it’s time to adapt-and-overcome because the men and women to your left and right depend on it. Many of us (including me) fail to realize that this strength exists in us.

The most important rule, then, for anyone who is suddenly faced with a survival situation, is to keep from panicking.

Instead, accept your problems as calmly as possible, form a definite plan of action to provide for your immediate needs, and then take action knowing that all the necessities for survival are within easy reach.

Fear and panic are deadly, both on and off the battlefield. They can spread quicker than any virus and have debilitating effects on people. A remedy for fear is acceptance of the situation and to develop and implement a course of action to counteract the dread. Move with a purpose and take action. Precious time is wasted when sitting idle with fear.

“Fear is the path to the dark side. Fear leads to anger. Anger leads to hate. Hate leads to suffering.” – Yoda

“If you keep on complaining, you’re all going to die.”

As soon as you start doing something the whole world looks a lot better.

By now, in quarantine, most of us have all come up with activities to keep busy at home. One benefit of having nowhere to go is having the time to catch up on reading, projects, or other hobbies that have been pushed aside in the normal hustle of our lives. If you haven’t done so, then you better get moving. Binge-watching Netflix doesn’t count.

Quit wallowing in the misery of the situation and do something. It’s easy to be lazy during this time and, while it may even be justified, depression follows closely behind laziness, and that’s not the direction you want to go. The sheer act of doing can do wonders for your psyche and will help remind yourself and others that you are capable of surviving.

Let your curiosity carry you through this time; learn a new skill, sign-up for that online class, start or finish that book on your nightstand. For those with children, look to them for guidance and learn from their sense of wonder. Put your phone down and focus on them; they will rekindle your imagination while putting a smile on your face.

One of the most effective keys to survival is living each moment as it comes.

“…one wave at a time.” Don’t compound your problems into an ocean of troubles and you will come through just fine.

Sometimes an amazing thing happens when you live in such a way. You can become attuned to “now” living that each moment seems like a gift. And the sense of gratitude over each gift can lead to such a joy that your spirits are uplifted and you find a reserve of strength you didn’t know you have.

Being in the present moment may prove difficult with the distractions that come with living in a hyper-connected society, but it can be done by simply unplugging – as in literally unplugging the cord to all devices. I promise it will be okay. Once the buzz of the electronics has been silenced it’s easier to tune into the present situation without distraction.

It’s easy to compound issues by getting sucked-in to the matrix of our wifi-driven world. We do it to ourselves daily. We overload, overcommit, and overcompensate. Instead, we need to face each challenge head-on, one at a time, before tackling the next. Something is to be said for the satisfaction of physically checking off completed tasks, one at a time. Because long lists can be daunting, keep it short with obtainable goals.

But if you can separate your wants from your needs and see the beauties that surround you, if you can keep yourself in good physical shape and see the challenge of survival with well-honed skills, you will live easily in a survival situation and come to know the sense of one-ness the flows from the heart of the wilderness.

Tom Brown summarizes it all with one hope-filled sentence that, if executed, will see you through this pandemic, re-deployment, or any other survival scenario.

It has been five years since I was first introduced to Brown’s writings on survival. The looming storm that had made me anxious swept over the mountaintop with only light rain. The darkness came and passed, and I survived.

Now another storm is upon us, and I find myself turning back to Tom Brown. His perspective on attitude serves as a reminder of what I have overcome when things don’t go as planned. It is a guide to help me find the strength needed to face any challenge.

This is why I am sharing this with you; to remind you that you are stronger than you think and that you can get through anything with a positive mindset and can-do attitude.

Erik Villaseñor is a former US Army infantryman who hunted IED’s in the streets of Iraq and shot at ghosts in Afghanistan’s “Valley of Death.” He now leads a much more civil life in western Colorado where he is a graphic designer, husband, and father. When he’s not changing diapers or pushing pixels on a screen, he can be found exploring the local mountain bike trails.